Stein Eriksen emerged on the national scene in 1947, aged 19, when he won the downhill and combination at the Holmenkollen Kandahar event. He was Norwegian Champion six times in the period 1949-54. His international breakthrough came in the World Championships at Aspen, Colorado in 1950, when he won the bronze medal in slalom. At the Oslo Olympics in 1952 Eriksen won the gold medal in giant slalom and silver in slalom, being the first skier from a country outside the Alpine region to win an Olympic gold medal in alpine skiing. He had a great season in 1954, when he won three gold medals at the Alpine World Championships in Åre, Sweden, in Slalom, Giant Slalom and Combined.

Following his racing career, he was a ski school director and ambassador at various resorts in the United States. 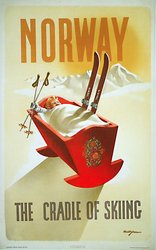 Norway - The Cradle of Skiing