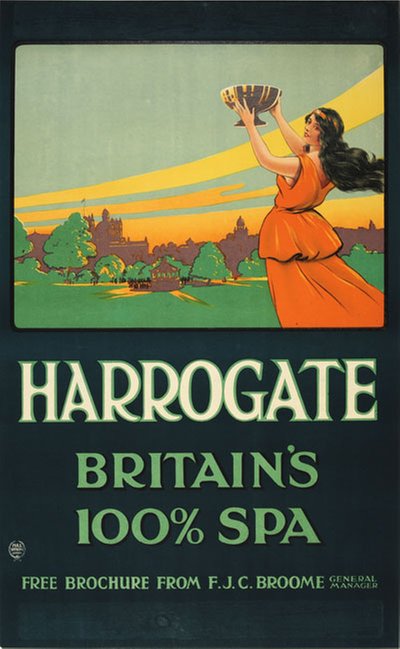 
Harrogate is a spa town in North Yorkshire, England. Historically in the West Riding of Yorkshire, the town is a tourist destination and its visitor attractions include its spa waters and RHS Harlow Carr gardens. Harrogate spa water contains iron, sulphur and common salt.

The town became known as ’The English Spa’ in the Georgian Era, after its waters were discovered in the 16th century. Hundreds of thousands have drunk from Harrogate’s ‘healing’ mineral waters. But thanks to a new European health and safety directive, visitors to the spa town are now banned from taking the merest sip.

According to National Railway Museum this poster is from about 1915, witch makes it an antique.

The poster depicts a woman holding up an urn before she takes a drink. In 1902 the Great Northern Railway started running express services from Kings Cross to Harrogate via the Church Fenton to Harrogate line, with three daily trains in each direction. These continued after the grouping in 1923 and included the prestigious ’Harrogate Pullman’. Under the 1923 Grouping, the Great Northern became part of the London and North Eastern Railway (LNER). Mounted on linen.

This is an Authentic Original Vintage Poster from its time. It's not a new reproduction.