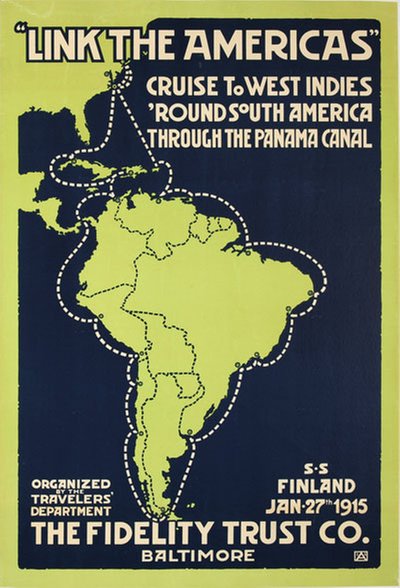 
SS Finland was an American-flagged ocean liner built in 1902 for the Red Star Line. During World War I she served as a transport for the United States Navy named USS Finland (ID-4543).

SS Finland sailed for several subsidiary lines of International Mercantile Marine, including the Red Star Line, and also under charter for the White Star Line, the Panama Pacific Line, and the American Line. Sailing out of New York, she sailed primarily to ports in the United Kingdom, Belgium, and Italy. She also briefly sailed on New York to San Francisco, California, service. In 1912, Finland was chartered by the American Olympic Committee to take the U.S. team to the 1912 Summer Olympics in Stockholm, Sweden.

Text on the poster:

This is an Authentic Original Vintage Poster from its time. It's not a new reproduction.
Price:
USD$ 425