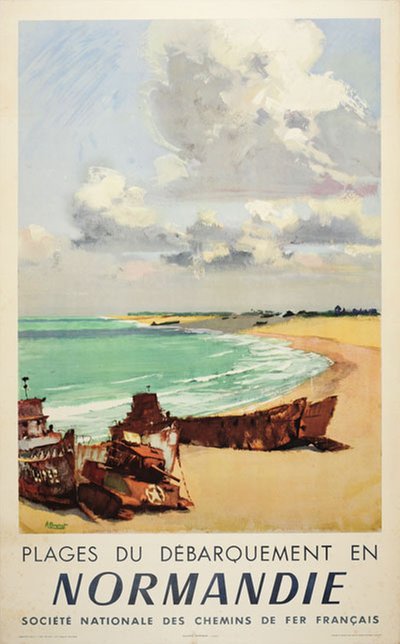 
A rare original poster designed by Albert Brenet depicting the beaches of Normandy with the remains of allied landing craft from June 6, 1944.

“On 6 June 1944 the Western Allies landed in northern France, opening the long-awaited “Second Front” against Adolf Hitler’s Germany. Though they had been fighting in mainland Italy for some nine months, the Normandy invasion was in a strategically more important region, setting the stage to drive the Germans from France and ultimately destroy the National Socialist regime.

In good condition. Signs of foxing. Mounted on linen,

This is an Original Vintage Poster. It is not a reproduction.
The poster has been sold. Let us know if you want us to look for it.
NB! - Remember you can subscribe to our Poster Alerts!
You'll receive an email when we add new posters from France - Be the first know!