Air Ceylon The trunk route of the Orient 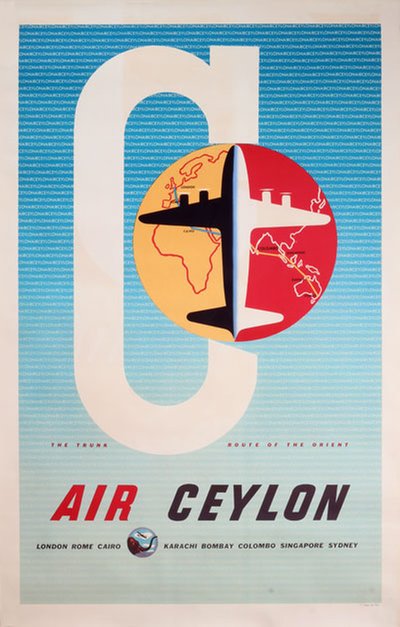 
A stunning original vintage airline poster issued by Air Ceylon to promote air travel in the Orient using the slogan "The trunk route of the Orient" and printed destinations like: London, Rome, Cairo, Karachi, Bombay, Colombo, Singapore and Sydney.

Air Ceylon operated the international services in cooperation with Australian National Airways (ANA) which had a 49 percent stake in the airline. The longest route flown at the time was from Colombo to London.

Both ANA and Air Ceylon used some of the same posters for advertseing, just changing the logo. This poster is very rare!

In excellent condition ready to be framed and put on the wall.

This is an Authentic Original Vintage Poster from its time. It's not a new reproduction.
Price:
USD$ 2,150