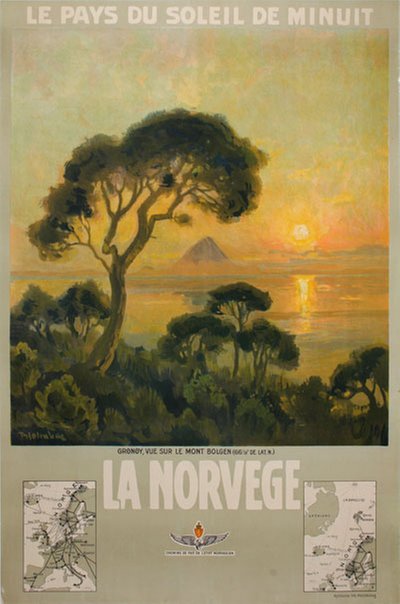 
La Norvege le pays du soleil de minuit. Thorolf Holmboe was a Norwegian painter, illustrator and designer. There exists a theory that this scene, from Grønøy with the view of Bolgen Mountain, was the inspiration for the famous Norwegian matchbox 'Hjelpestikken'. This urban legend is unfortunately incorrect..

Holmboe is well known for his landscape paintings from northern Norway, he is represented in the National Gallery with several paintings.

In the Europe map you can see the city of St. Petersburg is called Petrograd (Petrograd was its name from 1914–1924)

The poster has two French tax stamps. Posters required a tax stamp to indicate that a fee had been paid for the right to display it. The poster has some wear. It has been folded. Mounted on linen.

This is an Original Vintage Poster. It is not a reproduction.

The poster is on hold by a customer.

Let us know if you are interested if it does not sell. mail@posterteam.com
Remember you can subscribe to our Poster Alerts!