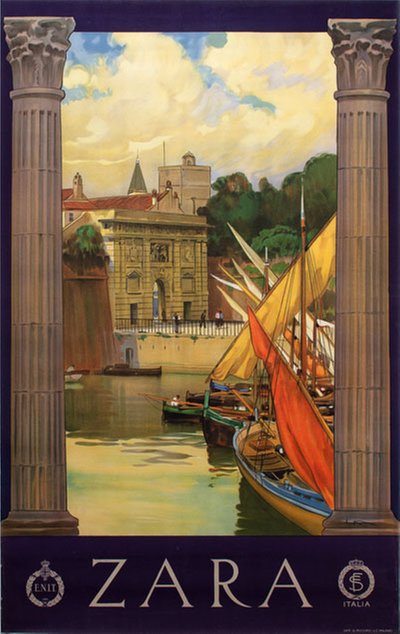 
This original vintage Italian travel poster has an impressive rendering by Metlicovitz depicting the City Walls of Zara with its famous Land Gate.

Zara or Zadar as it’s called today is the oldest continuously inhabited Croatian city. It is situated on the Adriatic Sea, at the northwestern part of Ravni Kotari region. Zadar was once the largest city-fortress in the Republic of Venice and its City Walls were an important part of an elaborate defence system. The Province of Zara was a province of the Kingdom of Italy, officially from 1918 to 1947.

The Land Gate is the main entrance into Zadar built by Michele Sanmicheli in 1543 and it has a form of a triumphal arch with a central passage and two smaller two arches for wheeled traffic and pedestrians. The gate is decorated with the Shield of St. Mark, and another motifs as St. Chrysogonus on his horse and is considered as one of the finest Renaissance monuments in whole Dalmatia.

This is an Authentic Original Vintage Poster from its time. It's not a new reproduction.
The poster has been sold. Let us know if you want us to look for it.
NB! - Remember you can subscribe to our Poster Alerts!
You'll receive an email when we add new posters from Italy - Be the first know!