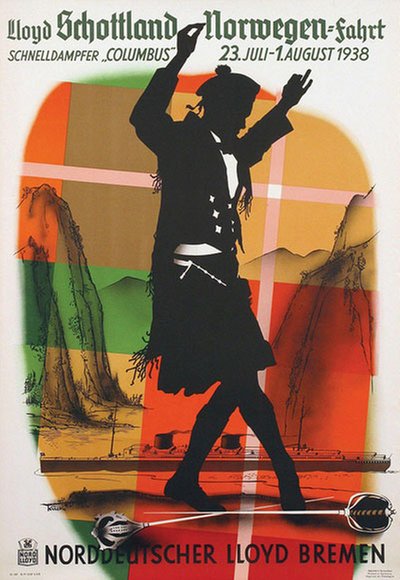 
A very rare original Norddeutscher Lloyd poster promoting a cruise to Scotland and Norway with the huge steamship Columbus.

Former Hindenburg, was completed in 1924 and named Columbus; she was placed in scheduled transatlantic passenger service. She measured 32,581 gross tonnage, was 775 feet (236 m) long with 1,750 cabins for luxury, first, second and tourist class passengers. Her maximum speed was 23 knots. Columbus was scuttled by crew to avoid capture by Royal Navy, 19th December 1939 in the early stages of WWII.

The poster depicts a dancing Scotsman with a Scottish tartan, the Columbus and some Norwegian fjord as a backdrop.

This is an Authentic Original Vintage Poster from its time. It's not a new reproduction.
Price:
USD$ 950