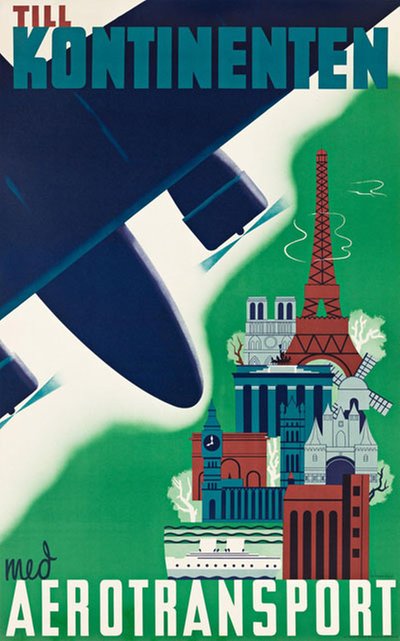 
This original airline poster promotes flights to the continent depicting European landmarks seen from above, with the outline of a DC-3, which ABA began operating in 1937.

Designed by Anders Beckman who was one of Sweden's foremost graphic designers. Among his major clients was AB Aerotransport (ABA), Sweden's first airline company, which eventually became SAS. He is also know for the Swedish Pavilion he designed for the 1939 New York World's Fair.

Today, Beckman’s name is first and foremost associated with the school that bears his name, Anders Beckman’s School (now Beckmans College of Design) in Stockholm, which he founded in 1939.

This is an Authentic Original Vintage Poster from its time. It's not a new reproduction.
Price:
USD$ 1,750