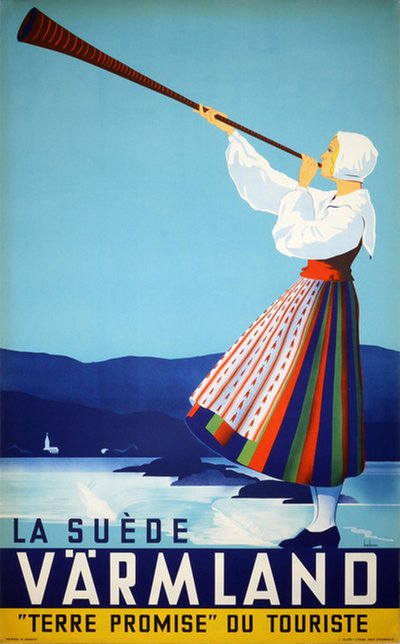 
Värmland is a historical landscape in the west of middle  Sweden. It borders Västergötland, Dalsland, Dalarna, Västmanland, and Närke, and is bounded by Norway in the west.

The poster depicts a young woman in traditional costume playing on her "lur". The earliest references to the instrument lur come from Icelandic sagas, where they are described as war instruments, used to marshal troops and frighten the enemy.

A lur similar to these war instruments has been played by farmers and milk maids in Nordic countries since at least the Middle Ages. These instruments, called in English a birch trumpet were used for calling cattle and signaling.

The artist of this poster is Anders Beckman. Beckman was a multi-talented representative of the emerging Swedish advertising industry. He studied the years 1927-1930 at Högre Konstindustriella Avdelingen ved Tekniska skolan i Stockholm (the University College of Arts, Crafts and Design).

This is the French version of the poster with the text: "Promised Land of the tourist". It's not dated, but according to the Royal Swedish Library this poster was drawn in 1936.

This is an Authentic Original Vintage Poster from its time. It's not a new reproduction.
Price:
USD$ 900