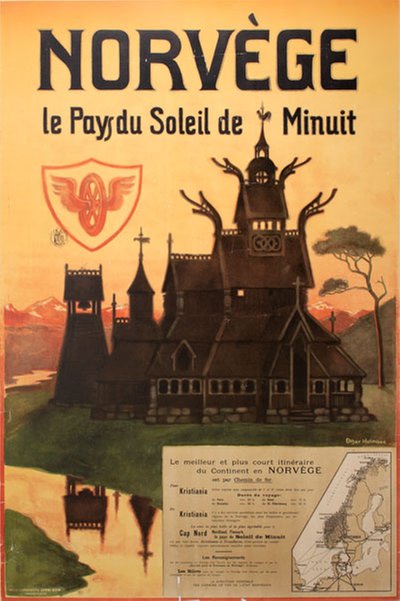 
This is the first Norwegian travel poster. The poster was the result of a contest arranged by NSB - Norwegian State Railways, won by Othar Holmboe. The poster depicts a Norwegian Stavkirke in the midnight sun and a inset with railway routes to Europe.

The poster has probably been in use for more than 20 years. The map indicate it's pre 1924 naming Oslo as Kristiania.

Text: "The best and shortest route in NORWAY is by Rail."

Holmboe was trained as a pharmacist in 1887 and worked several years at Tromsø pharmacy. He was, like his brother Thorolf Holmboe, a student at the Royal College in Christiania with study trips to Paris (1896). He was also, for a short period, in 1900 a student at Zahrtmann art school in Copenhagen.

The poster is mounted on linen. Age wear. Upper left corner is repaired.

This is an Authentic Original Vintage Poster from its time. It's not a new reproduction.
Price:
USD$ 825