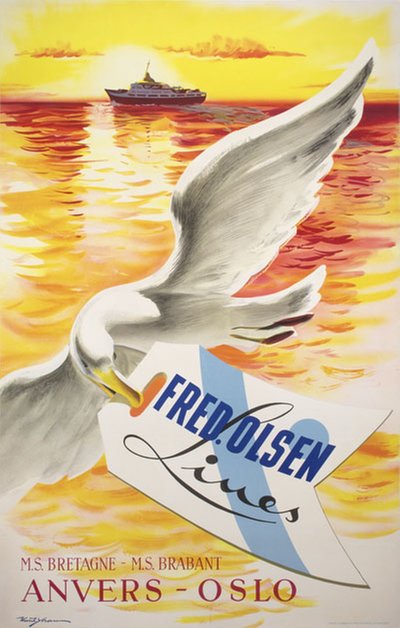 
This is a stunning original vintage poster issued by Fred. Olsen Line to promote their Oslo-Antwerp route.

A colorful rendering by Knut Yran depicting a Fred. Olsen Line ship at sea  with a Seagull in the foreground of a colorful yellow sky during sunset.

The route was serviced by M.S. Brabent and M.S. Bretagne.

Mounted on linen. A very hard poster to find. The second time we have it in stock.

This is an Authentic Original Vintage Poster from its time. It's not a new reproduction.
The poster has been sold. Let us know if you want us to look for it.
NB! - Remember you can subscribe to our Poster Alerts!
You'll receive an email when we add new posters from Norway - Be the first know!